Periactin has an antihistamine activity (it blocks H1 receptors) but it is also a strong antiserotonin ingredient (it reduces spasmogenic and other effects caused by serotonin). This drug is the most effective during the allergic reactions which are accompanied by the strong itching and rash. Perhaps, the strong antipruritic effect is conditioned by antiserotonin action due to which this drug is more preferable during the allergic diseases.

The symptoms which are accompanied by the allergic reactions usually start weakening in one hour after the drug use. However, the length of the therapeutic effect of Periactin is rather low, and therefore the tablets should be taken several times a day in order to maintain a high concentration of the drug in the blood.

Periactin is approved by FDA for the treatment of the anaphylactic reactions caused by allergens, and it is often used as an addition to the injection of adrenalin. Moreover, the drug is able to cause the improvement of the appetite. This effect is also conditioned by the ability of the active component hydrochloride cyproheptadine to inhibit serotonin receptors. 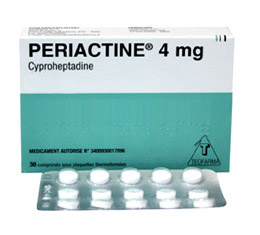 Directions for the use

As histamine and serotonin increase secretion of juice of pancrease it is also acceptable to use Periactin in the combined therapy of the chronic pancreatitis.

Way of use and dosage

In the first days of the treatment patients may experience the increase of the skin allergic symptoms. Usually, these symptoms pass within 1-2 days after the beginning of the treatment. If the relapses of the allergic reaction are not reduced and the patient does not see the improvement of the symptoms, it is necessary to terminate the use of the tablets of Periactin and see a doctor.